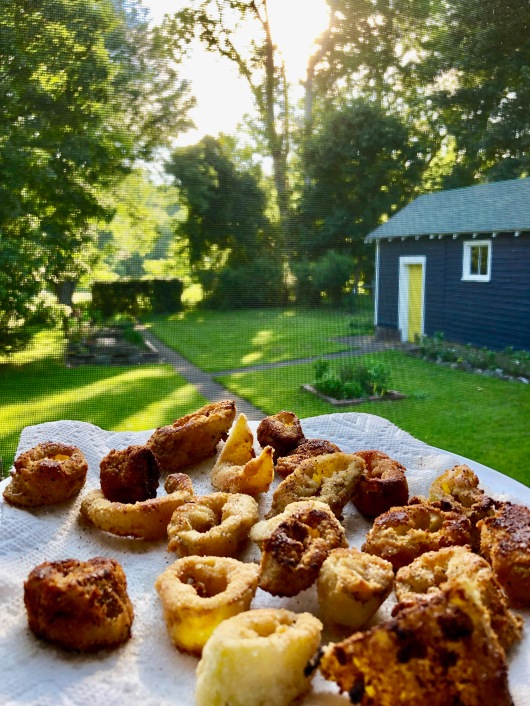 Gluten-free pizza elicits the same response at a Hollywood party as a pile of cocaine did in the 80’s.—Natasha Leggero

I want to be upfront about this, I do not have celiac disease.  I just like banana peppers fried in almond flour.

If you like fried banana peppers and can’t have flour, this may be a way for you to enjoy this southern delicacy.

We were looking for a way to fry banana peppers because Mrs. Big Surf did not really like the peppers fried in flour. On a whim, we decided to try the almond flour and we loved them.

I know there are as many opinions of ways to bread veggies for frying as there are reasons for CNN to impeach Trump (sorry, first and last political reference) but I like to keep it simple for no one ever sponsored me into that Mensa club.

I use fresh banana peppers.  These were the first of the year for us here in eastern Kentucky.  If you look closely at the above photo, you can see our little pepper patch in the center of the yard.

I like to cut them in rounds and not long as some do.  I first dredge them in almond flour and then into frothed up egg whites and a return dredge through the almond flour.  I fry them in vegetable oil in an iron skillet, because if I am using the iron skillet, Mrs. Big Surf can’t smack me with it for something stupid I did earlier in the day. (See above Mensa statement.)  The oil needs to be as hot as you get standing in line with your 4-yr old at Disney World in July waiting to see the latest Disney princess. But be careful not to let it get too hot, they should only take about 30-45 seconds on each side.

Let them dry on a paper towel and salt and pepper liberally ( oops second political reference).

Enjoy them as an appetizer in the late afternoon sun.  We do.