Evidently, Alexander the Great had a different experience in Athens than my wife and I.  The only dangers we faced in our four days in Athens were gluttony,  over-stimulation of the senses, and sunset fatigue.

So when we were able to plan a side trip to Athens on our way to see some family in Turkey, we jumped at the chance.  It is an easy city to explore on foot and four days was plenty of time for us to see what we wanted in a relaxed visit.  The ancient sites and neighborhoods were an easy walk from our stay at the Acropolis Museum Boutique hotel (a 40 Euro cab ride from the airport).

We went to Athens in the middle part of April. We had some rain at times and some cool nights.  When it wasn’t raining, a tee shirt and long pants were very comfortable.  My wife wore some sleeves and we both had light rain jackets.  We still had pleasant evenings and saw some wonderful sunsets.

I will apologize for the many, many photographs.  I had a hard time editing.

The following are scenes of the Acropolis  with the Parthenon and other sites.

I was mesmerized by these lovely ladies, possibly supermodels of ancient Athens.

The Theater of Dionysus. 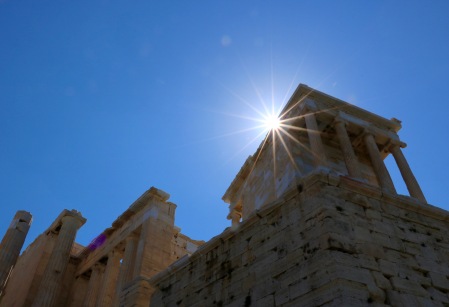 Sunburst over the Temple of Athena Nike.

There are some incredible views from the Acropolis looking out over the city of Athens. 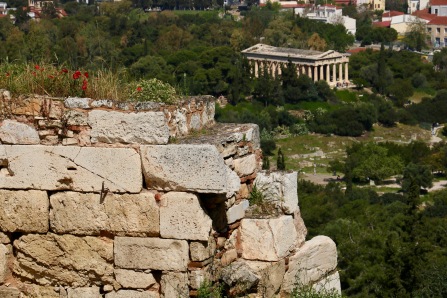 We climbed up to Mars Hill for a late afternoon view of Athens and joined the sunset seekers awaiting the show.  I think we were the oldest folks there.  Don’t despair for it is an easy climb up to Mars Hill.  I was more interested in being in the same place where the Apostle Paul introduced the Gospel of Christ to the Athenians.

The trail up to Mars Hill was decorated with wild flowers. It is a very rustic path to the top.

The view of the Acropolis from Mars Hill. 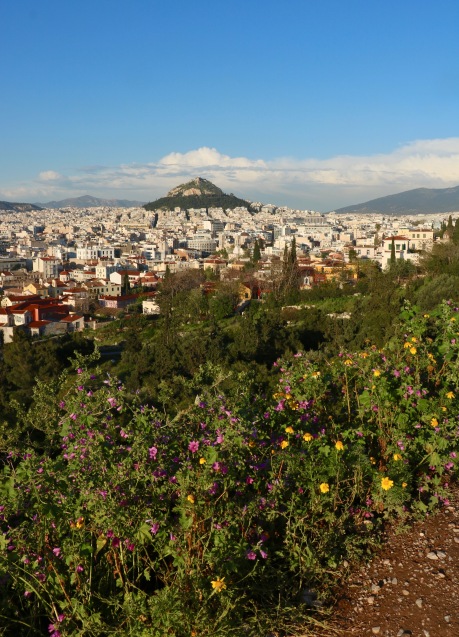 The Panathenaic Way in the Ancient Agora.

Ancient column top or pedestal in the Ancient Agora with the Temple of Hephaistos in the background. 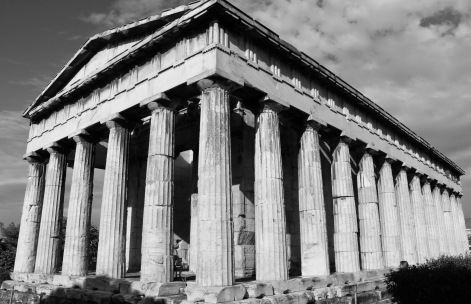 Temple of Hephaistos in the Ancient Agora. 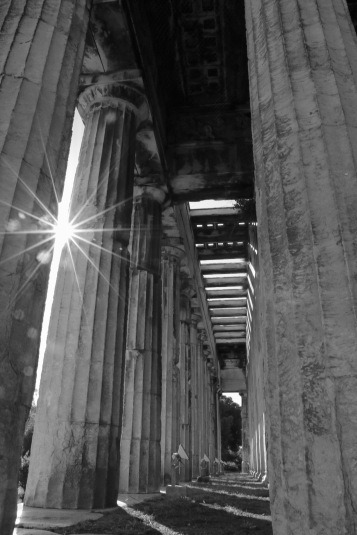 Columns of the Temple of Hephaistos.

Hadrian’s Arch seen from inside the Temple of Zeus area.

Hadrian’s Arch seen on one of our night walks.

The Panathenaic Stadium, all marble.

Inside the Zappeion building.

Guards at the Tomb of the Unknown Soldier outside of the Parliament building.

The beginning of Ermou street, a pedestrian only shopping street beginning across from the Parliament building. 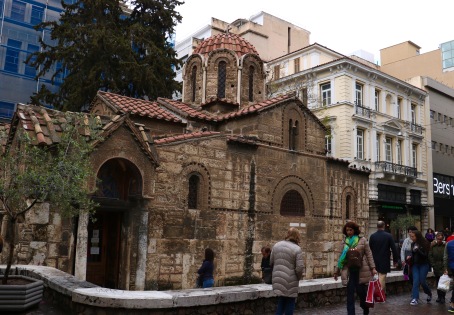 As you walk down Ermou street, you will come upon the beautiful small church of Kapnikarea.

The following are scenes around Hadrian’s Library. 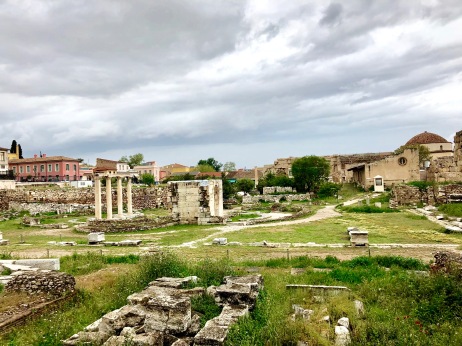 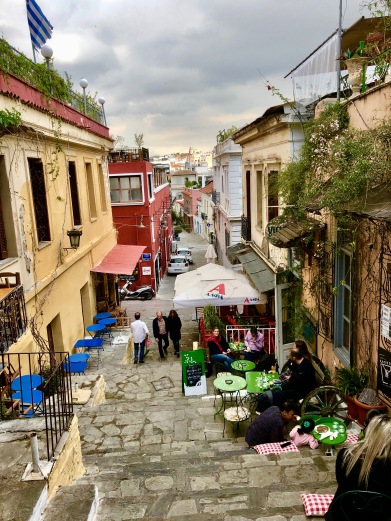 Outside tables of the small cafes on the steps of Plaka.

One of the narrow paths between houses in the Plaka neighborhood at the base of the Acropolis. 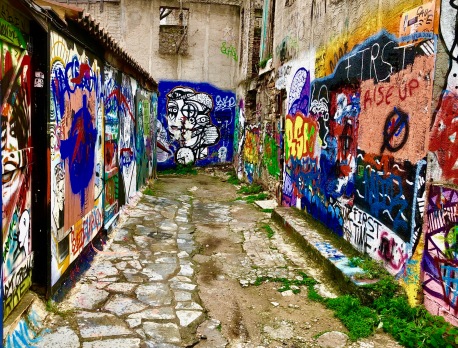 A colorful graffitied path in the Plaka neighborhood.

The market near Montistoriki Square.

This is the terrace of the Acropolis Museum. It looks like a great place for coffee or lunch.  It was rainy this day, so it was the day we picked to go to the museum. It is a fascinating museum of sculptures and statues and to learn about the Parthenon which can be seen atop the Acropolis.

One of the ancient sculptures in the Acropolis Museum, Hercules wrestling a sea creature.

The following are colorful street scenes in Athens, a great city to explore on foot. 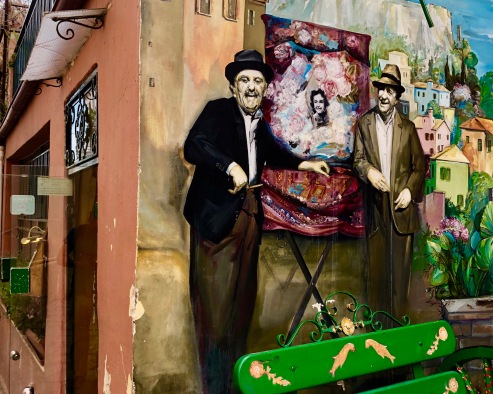 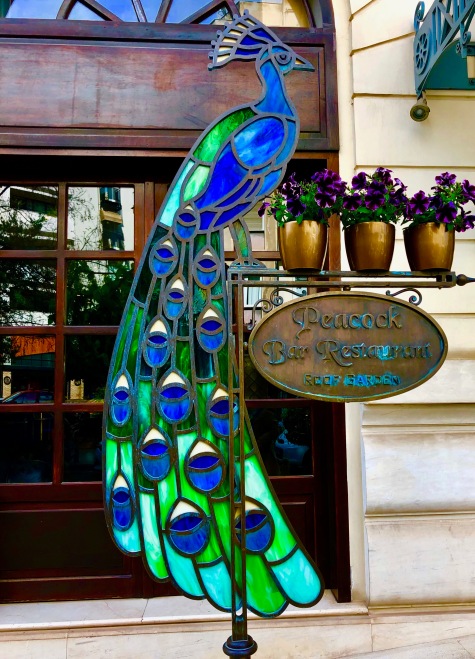 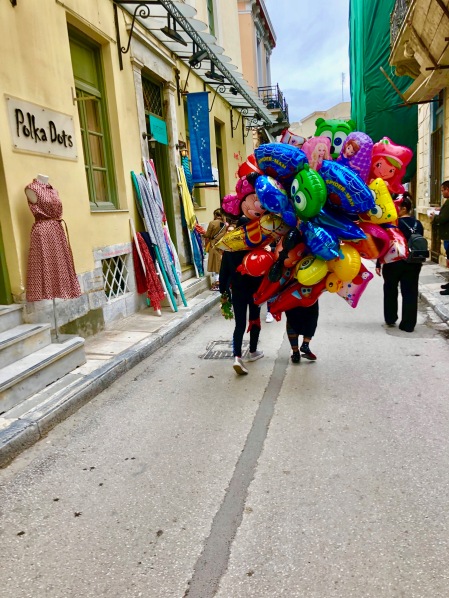 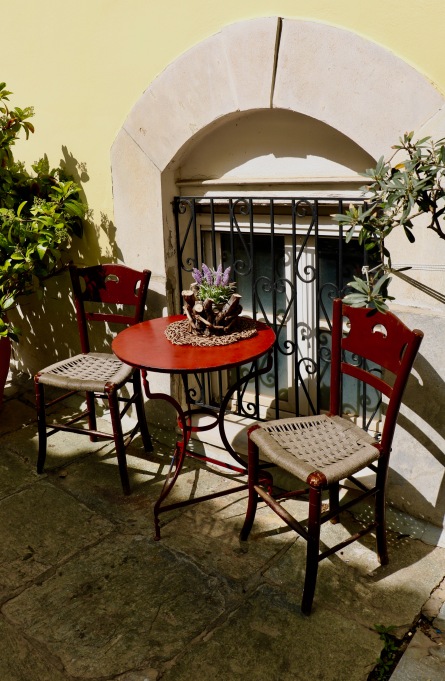 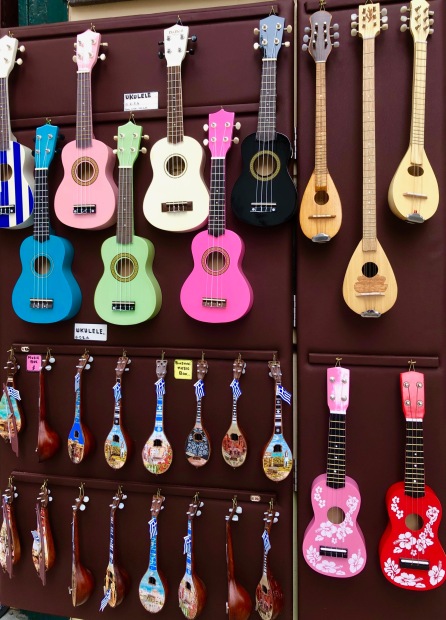 One last look at the sun-drenched city and I will say good-bye.